A couple of disclaimers to get out of the way before I dig in to my review. Firstly, I am reviewing my own copy of the game bought myself and secondly, at the time of writing a couple of features are still not live yet. Forzathon, which is timed events and challenges, the auction house where people can buy and sell their cars to other people online, and online leagues are not live yet over two weeks after launch. If that changes afterwards I may update this review.

Forza Motorsport 7 is the latest entry in the 12-year-old Forza Motorsport franchise from veteran racing developers Turn 10 Studios and is exclusive on Xbox One family of devices and Windows 10 PCs. It builds on the last entry Forza Motorsport 6, which featured 400+ cars at launch and 30 locations, with multiple track variations as well as adding rain and night racing to the series for the first time. 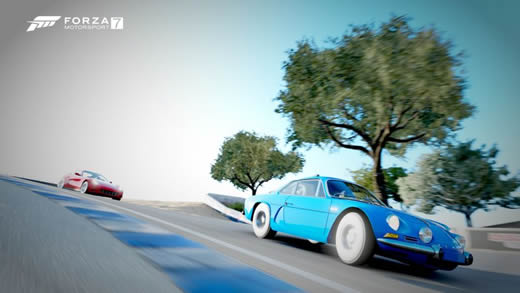 Forza Motorsport 7 builds on those foundations by increasing the car list to 700 cars and adds in a few new tracks, with two being returning fan favourites from past Forza titles in Mugello Raceway, which is an official real world track, and Maple Valley, which is fictional made by Turn 10. The other new addition is a new fictional track based in Dubai. Otherwise the tracks are the same as in Forza Motorsport 6, although many of them now have more dynamic weather and time of day options – more on this later.

The 700 strong car list isn’t numbers for numbers’ sake either with each and every car deserving a place in the game. And every single one is of Forzavista standard in terms of design and painstaking detail at how closely they resemble their real world equivalents, as all 700 are real world cars officially licensed. Many cars are brought over from last year’s Forza Horizon 3, as well as several new cars from production to real series of multiple different motorsports.

Further to that, and this is something I’ve wished for a while now, cars are divided up into their own respective divisions. So F1 cars will only race against other F1s in single and multiplayer, GT3s only, hatchbacks race against other hatchbacks, etc. This is a very welcome change, as with previous games certain cars often dominated online and were sometimes banned completely from online lobbies because they were so overpowered. Notably the 1970s F1 cars in R Class, where no other class of car came close to their speed.

But that’s gone now, with every car having its own correct division to race in. Also, there are restrictions in place to ensure you can’t upgrade cars past a certain amount of horsepower, tyre width, and power level and there is an option that will automatically tune and upgrade your car to the appropriate level called homologation. Which ensures fair and balanced races. There is multi-class races available online, as well but these still are governed by homologation rules to ensure they are fair.